Japan is a wonderfully strange country. It’s the cultural differences that make travel interesting and Japan is full of them. These are some random observations that we jotted down in our moleskine as we travelled around the country.

This post was originally written in 2011 and has been updated after multiple repeat visits to Japan.

1) Japan has recovered extraordinarily well from the earthquake. We didn’t see any signs of it, although we didn’t travel further north than Tokyo. We don’t see any reason to avoid travel there. (This was noted after our visit in August 2011).

2) Expect to be confused much of the time.

4) Japan is expensive. But totally worth it, and probably no more expensive than parts of Western Europe.

5) When we first arrived it wasn’t as super-modern or as traditional as we expected. These aspects take time to find.

6) When you find traditional Japan it is everything you expected.

7) We didn’t expect the ugliness that is found in some areas. There are many ugly concrete buildings and between Osaka and Kyoto there is a continual stretch of housing reaching right up to the train tracks.

9) Cartoons are used for official signs. This is a practice that should be adopted all over the world.

10) Japan is super-safe. Even in a big city like Kyoto people often don’t lock their bikes or houses. In cafés people will leave their mobile phones on the table while they go and order. It was nice not having to worry about crime.

11) Toilets range from squat (with instructions and a handrail to help you balance) to ultra-modern with multiple buttons for varying levels of spray and heated seats.

14) You’ll change your shoes a lot. You’ll need to take off your shoes when entering a home, guesthouse and even some restaurants and museums. You often change into the provided slippers, and when you go to the bathroom you change from them to the provided bathroom slippers.

15) Eating while walking just isn’t done. This can be harder to get used to than you’d think.

16) Not blowing your nose in public is difficult when you have allergies.

18) Traditional Japanese accommodation doesn’t have private bathrooms. Instead you’ll share a large bath with strangers. That freaked us out.

19) Don’t pour your own drink – pour for others and they’ll take care of you.

21) Although many street signs and train station names are in English, mostly you’ll be floating around in a sea of Kanji. Especially at supermarkets.

22) Learning to speak basic Japanese is easier than you think. It’s not a tonal language and there are no verb conjugations.

23) Learning to decipher Kanji on the other hand…

24) Japan has three alphabets. One would be hard enough.

25) Sometimes things are lost in translation…

This hotel information sign was the weirdest of all. We get the “Grime Prevention” confusion, but what on earth does this mean: “The all over Japan can send out blacksheep. I make acceptance at the front desk”. Then there are the signs on Japanese trains… 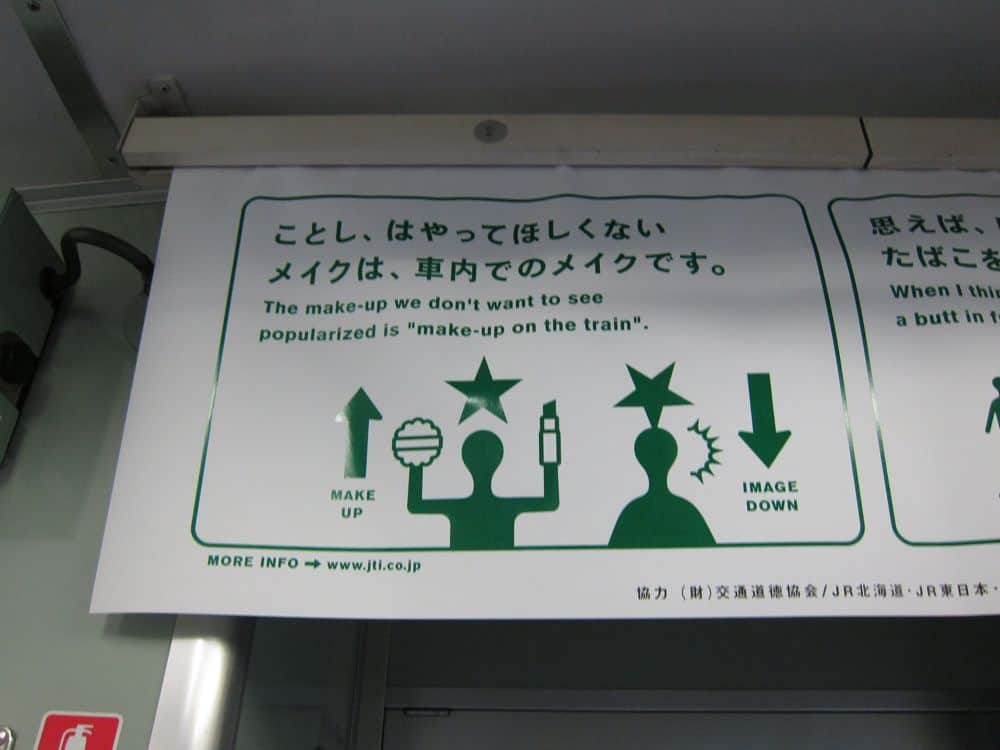 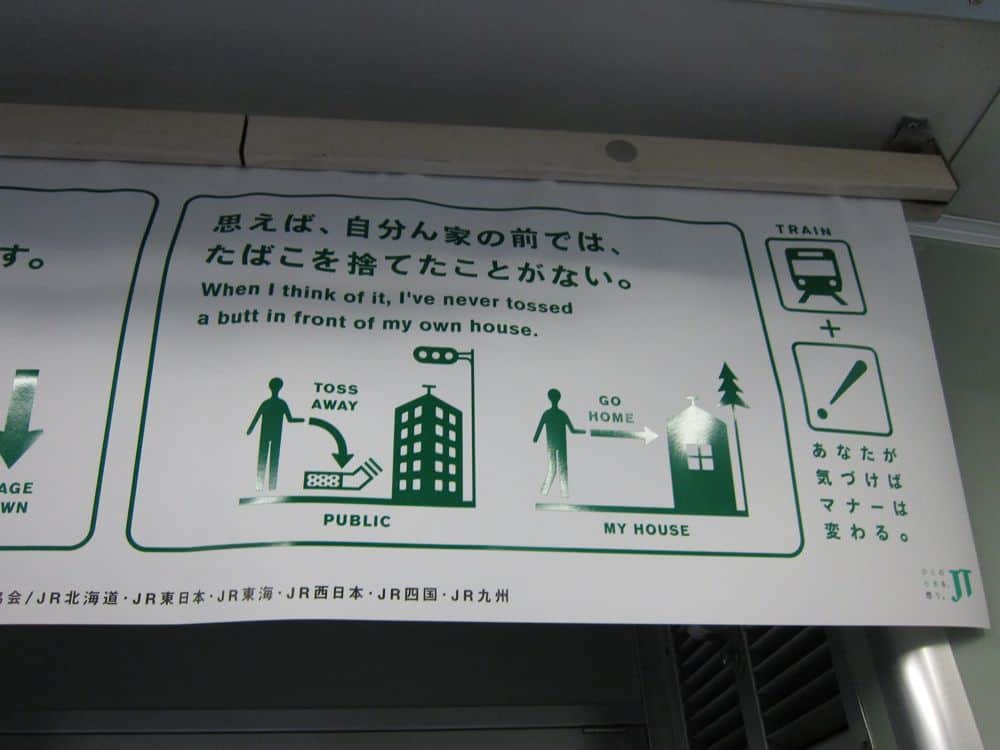 27) For the Japanese it seems essential to say “chizu” and make a peace sign when having your photo taken. When in Rome… 28) The Japanese don’t stare. We particularly appreciated this when struggling to eat slippery, unidentifiable blobs with chopsticks.

29) The people are super-polite. The world-renowned British politeness? Nothing on this.

31) In shops you’ll be greeted with a chorus of enthusiastic “irashimase” (welcome). As you leave the back and forth exchange of “arigato gozaimasu” (thank you) can go on for a while.

32) You can observe train drivers in their glass booths wearing white gloves and pointing out the window, seemingly randomly every 30 seconds or so. Apparently, this helps prevent errors by associating tasks with physical movements.

33) The Japanese are the only nationality who can pull off socks and sandals. 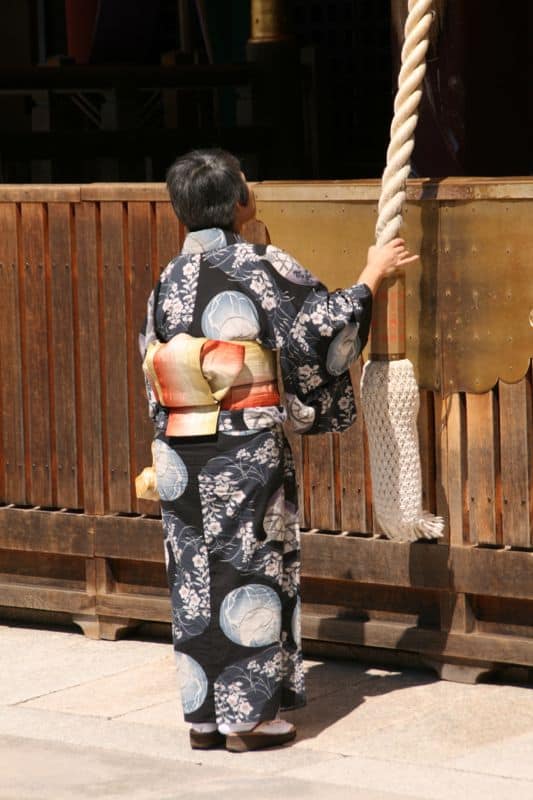 35) Geisha can still be found in Kyoto. Head to Gion in the evening for a chance to see one heading to an appointment (but be respectful).

37) Every Japanese male seems to carry a man-bag. 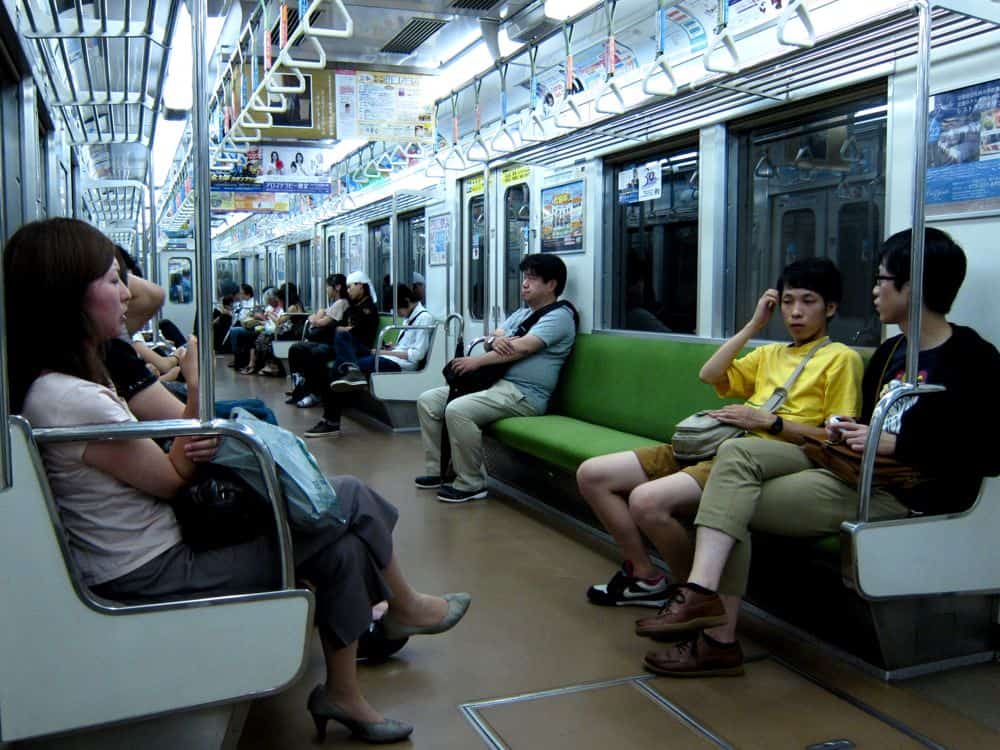 38) The supermarket guard near our house would always bow and say “herro” to us.

39) Women wear detachable sleeves in the summer to protect them from the sun. They also wear full face visors while cycling.

40) At parks and temples you’ll find lots of older men with SLR cameras and photography vests.

41) In our local ice-cream shop we were usually served by six smiling staff who’d greet us with an overwhelming chorus of “irashimase” and all contribute a few words of English while taking our order.

42) At Disney Tokyo, people are obsessed with the different flavours of popcorn that they collect in souvenir buckets that hang around their necks. It turns out that curry popcorn is really good.

45) Trains have different tunes that play when they arrive at a station. The music varies depending on the direction of the train – sometimes it’s spooky, other times chirpy and Disney-esque.

46) Bullet trains are awesome. It’s the only country we have travelled in where Simon has complained that the journeys were too short. 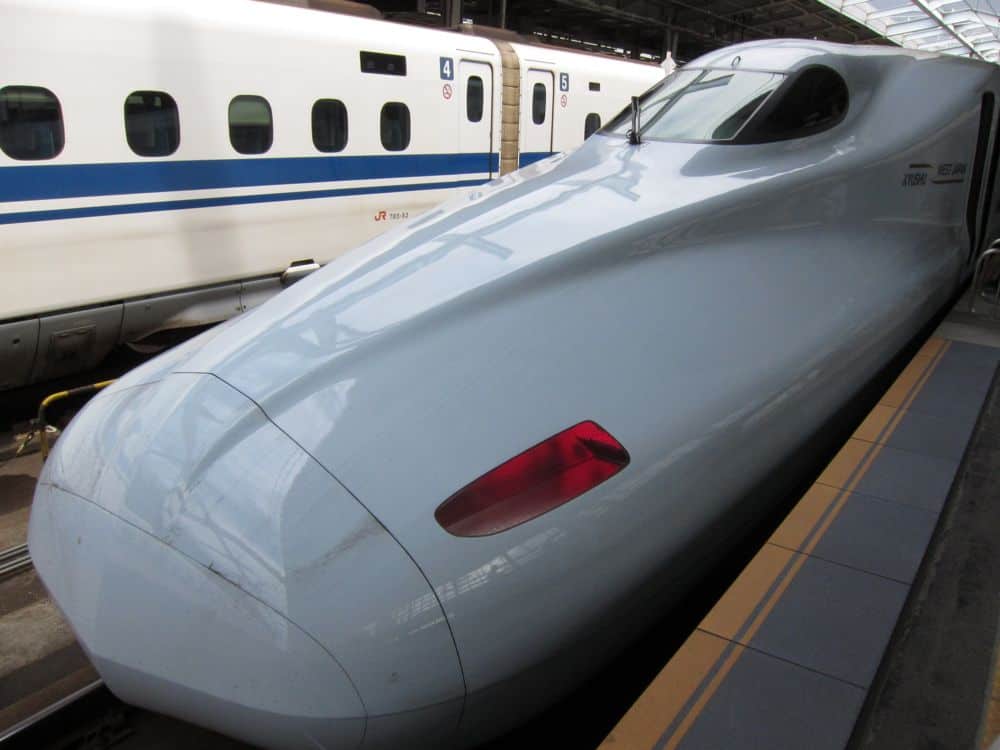 47) Trains have seats that swivel around so they all face the direction of travel, or you can turn them to face each other if you’re in a group. On some scenic routes they even turn sideways to face the window for maximum views.

48) Tokyo has the most confusing subway map we have ever seen.

49) The Japanese can seemingly sleep anywhere. Most people on a morning train are asleep. We don’t blame them though when working until 11 pm is normal.

50) Hyperdia was the best travel planning site we had ever used and negotiating the rail system without it would have been utter confusion. Unfortunately it’s now offline, but Navitime looks like it could be a good alternative.

51) Even carparks in Japan can be attractive. 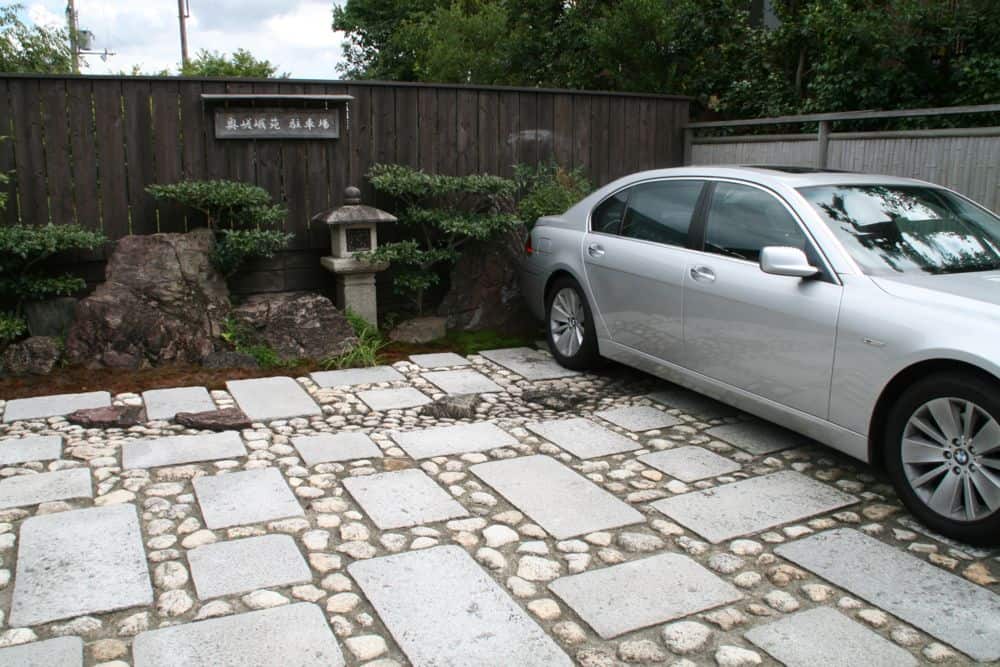 53) Tofu comes in more forms than you could possibly imagine. In Japan it is delicious and beautiful.

54) We had no idea what we were eating many times.

55) Vegetarians beware: fish broth is in everything. Luckily Kyoto has a tradition of shojin ryori, Zen Buddhist vegetarian cuisine and there are a growing number of excellent vegetarian restaurants in Tokyo.

56) Drinks are expensive, and not just alcoholic drinks. A soft drink or coffee can cost 450 yen in cafés and even more in restaurants. (Update: with the favourable exchange rates in recent years this isn’t so expensive anymore.)

57) Luckily vending machines are everywhere, even in rural locations. You’ll never go thirsty and soft drinks are an affordable 120 yen a can.

58) Sometimes vending machine drinks surprise you. A Minutemaid grape soda had slimy chunks of aloe in it. Odd.

59) I’m not a tea-drinker but I drank a lot of tea in Japan. It’s often included with meals.

60) Green tea ice-cream is not good. (Update: it has grown on me and can be very good!) 63) Japanese desserts are bewildering. They are beautiful but we had no idea what they were.

64) Umeshu (plum sake) is delicious and homemade in many homes.

65) Traditional restaurants can be ultra-minimalist with no chairs or tables. The tatami mat room of a temple we ate in…

66) Plastic food models outside many restaurants are amazingly realistic. 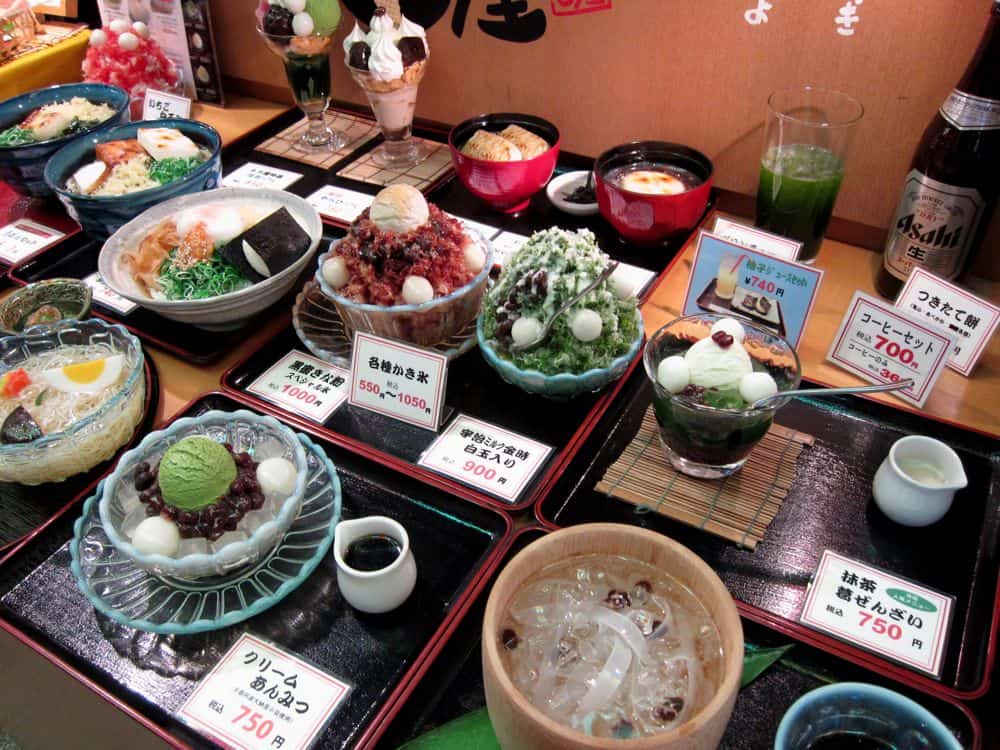 67) The Japanese are more religious than we expected. In Kyoto it seems like there is a shrine on every street where people stop as they pass, ring the bell and pray.

68) Kyoto has more temples and shrines, each different in their own way, than you could possibly imagine. But we never felt templed-out. 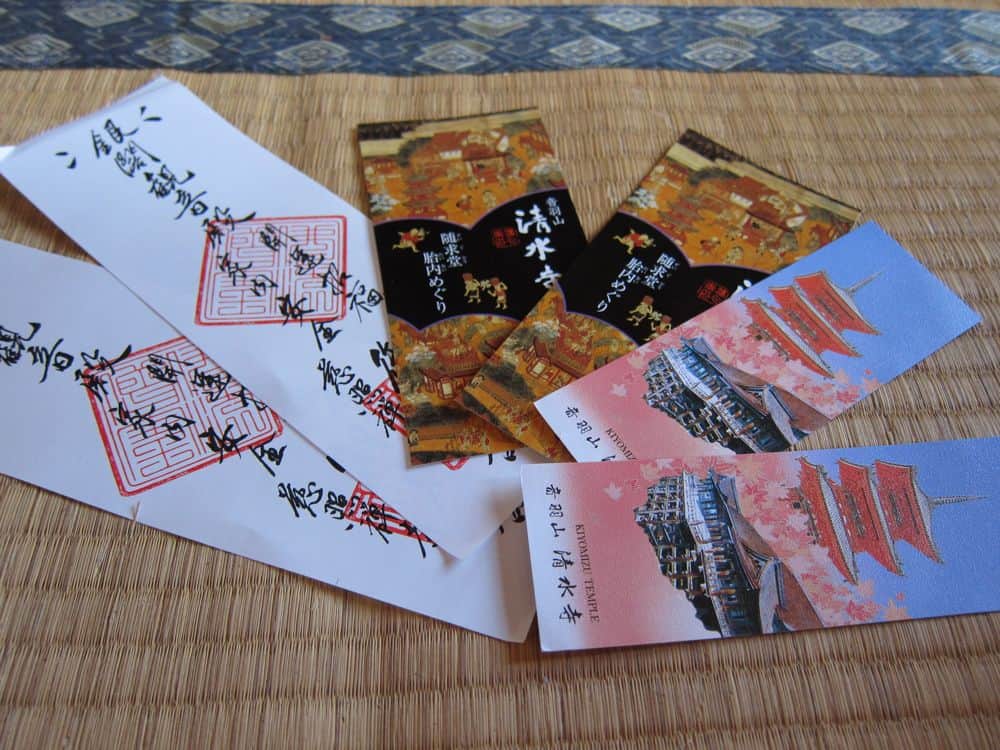 70) You can get your fortune told from a vending machine at a temple. 71) Ema are wooden plates at temples where people write their wishes. Most are in Japanese of course but we saw this one in English… 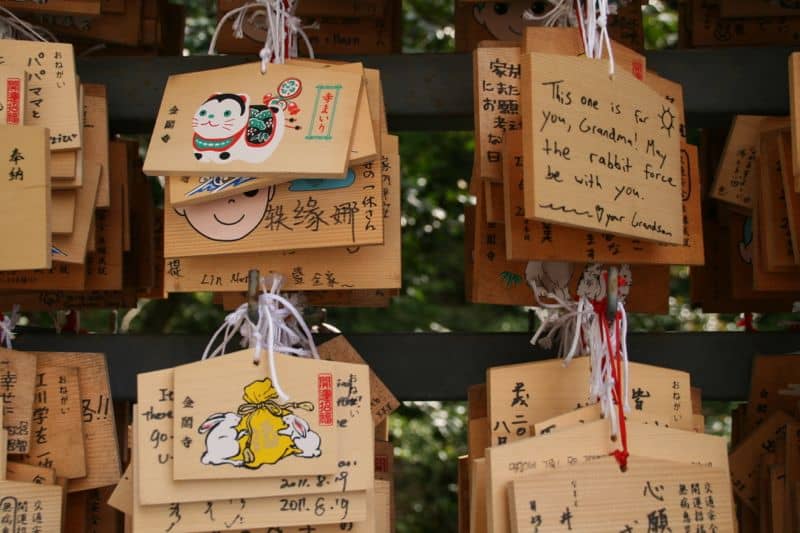 72) Bright red torii gates are everywhere and we loved them.

You might also enjoy our recommended books to read before visiting Japan, our Japan 2 Week Itinerary and tips for planning a trip to Japan.

Don’t forget to buy your Japan Rail Pass in advance before visiting Japan. It’ll save you money and make it much easier to get around.