That’s difficult for me to say. I feel an urge to diminish it. To say, it’s not a real book. It’s just about packing. It’s not a novel or memoir. It’s just self-published. Which is ridiculous because I read plenty of self-published non-fiction books that I consider “real” books. I don’t even want to write a novel or publish traditionally.

I’m working on owning it. It’s something I created. It was a challenge. And it’s useful to people. So, I’ve written a book.

I almost didn’t write it.

I first had the idea four years ago—I even planned out the contents. I chose packing light as my subject because our packing posts have been our most popular since we started this blog. Travellers often struggle with overpacking, and our readers love hearing how we manage to travel full-time with just a carry-on backpack each. It’s something I have a lot of experience with, and I knew I could help people lighten their luggage.

But then I talked myself out of it. It seemed like a trivial thing to write about—who writes a book about packing? So I put it in my virtual drawer and stopped working on it. It was always in the back of my mind, but I couldn’t commit to it, to convince myself it was a good idea.

Then, other people began to write books about how to travel carry-on only. This could have put the final nail in my book’s coffin, but it made me realise that I did want to write this book. And that I had something to offer. I wanted to write the ultimate guide to packing light that would include all my tips and answer every possible question. I write long, detailed blog posts, and my book would be an extension of that.

Of course, I procrastinated some more.

For a few years, I struggled with a lack of purpose. Travel and writing on the blog had become part of my normal life, and I felt that I needed to try something new. But I put so much pressure on myself—the new challenge had to be a big, ambitious goal, something I’d always wanted to do with my life, a real purpose. I couldn’t think of anything. The truth was that travel was what I always wanted to do with my life, and I was doing it.

After much agonising, I realised that it didn’t matter what I did. It didn’t have to be grandiose. It just needed to be something I was vaguely interested in trying. Doing something is better than nothing. Why the hell not just try it? So, at the end of 2014, while living in a casita overlooking Lake Atitlan in Guatemala, I began writing my book. I bashed out the first draft of 50,000 words in a month.

Of course, it was a shitty first draft. The only way I could keep going, to quiet the negative voices, was to follow Anne Lamott’s advice about just getting words down on the page without overthinking it. As she says:

“Perfectionism is the voice of the oppressor, the enemy of the people. It will keep you cramped and insane your whole life, and it is the main obstacle between you and a shitty first draft.”

My draft was a long way from being publishable, but it gave me the confidence and momentum to continue. And it felt so good to have finally started. The pain of procrastination is worse than the pain of writing.

We moved on to Mexico, and my next stage was research. I hadn’t wanted to get lost in this before I had my own thoughts down, but I did want to find out what gear other travellers recommended so that the book would go beyond just our experiences. I spent nearly two months researching and incorporating advice from other carry-on travellers, including adding an interviews section.

It felt satisfying to have a project, to finally be trying something new. I still had moments of doubt, and I was nervous when I announced I was writing the book to our newsletter readers. But the response was so positive that I felt inspired to continue. The announcement made it real, and I knew I would finish it.

But then we began to travel—to Disney World, visiting family in the US and the UK, Finland, Italy, a sailing trip, Paris, Amsterdam. We were moving around so much, and I had so much to write about on the blog that I didn’t have time to work on the book. I ended up taking six months off (although we were gear testing during this time). My goal of a summer publish date didn’t happen, but it did give me time away from the manuscript. When we finally settled in Bali, I was able to start editing the second draft with fresh eyes.

Sadly, those eyes told me it was a giant mess, tedious and terribly written. Was it pointless to continue? But I’d come so far, so I plugged away, rewriting and reorganising. The second draft took about a month and focused on content. The third draft took another few weeks and polished the language.

Finally, nearly a year after I started, I was ready to show it to the world. I started with Simon, and then sent it out to two sets of beta readers for feedback, with edits in between.

This was by far the hardest part of writing the book. Getting started was difficult (three years of painful procrastination!). Figuring out book formatting was frustrating. Learning more about grammar and punctuation was confusing. But none of this compared to how vulnerable you feel when you send something out into the world that you’ve worked so hard on. I was inviting criticism, of course. I wanted to make the book better. And the majority of the comments I received included useful suggestions for improvement but were overall positive. I was genuinely helping people to pack lighter.

But some of the comments. Ouch. A few people hated the book. They almost seemed to take it as a personal attack. Who knew packing could be such a controversial topic?

Those comments hit hard. Their voices echoed in my head, reinforcing my own demons. I wanted to give up. But I knew that was ridiculous after so much work. All I could do was keep moving forward. Time and work help ease the pain.

After editing my book so many times I couldn’t bear it any more, I sent it to a proofreader. A final polish and it was done! 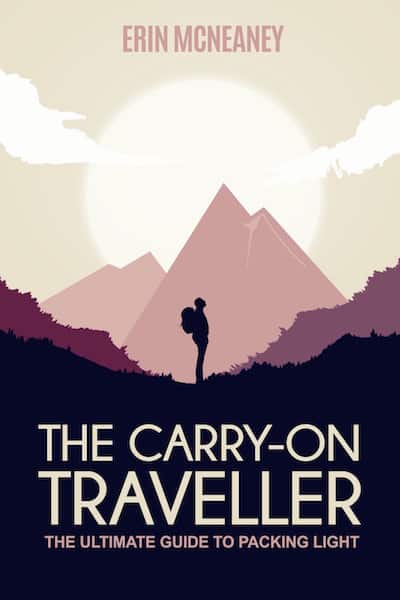 In the last month, I have focused on getting the cover designed, and the worst part of all—marketing. Writing the book felt so much easier than trying to get people to read it. I know logically that there’s nothing wrong with marketing—it’s just telling people about something they might find useful—but I can’t help feeling icky when I’m doing it.

That said, I had such an encouraging response from the bloggers I sent early versions of the book to, that I began to feel better about it. I filled all the slots in my virtual book tour for the launch with interviews, guests posts, and reviews on a variety of sites.

The Carry-On Traveller launches next Monday. I’m excited, terrified, exhausted. I’m sure the best and the worst of the book writing process are yet to come. There will be more ups and more downs.

But as the wise Brene Brown said on Elizabeth Gilbert’s Magic Lessons podcast:

I have no idea what will happen when my book launches, but I’m so glad I finally took the leap. I learnt so much in the air.

Recommended Resources for Writing a Book

Update: The Carry-On Traveller is now available! You can buy it for the Kindle or paperback on Amazon US.